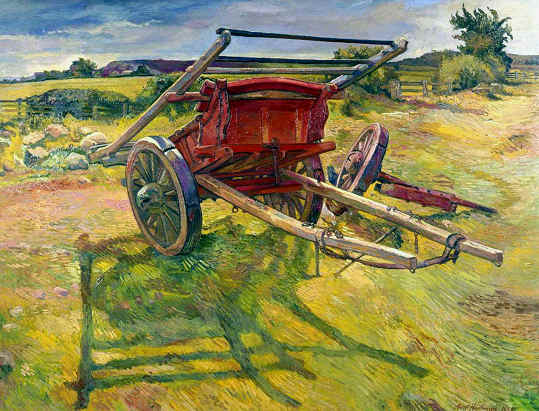 Trelogan became our honeymoon place. It wasn’t just a thing of a fortnight or even of one year. It was constant. One’s friends would jokingly say ‘going back to the same place’. And since we had no money, we had nowhere else to go. But it was lovely there. And through going back year after year, we came to know this amazing place with its colliers and farm workers. Its marvellous skies and air full of bees and butterflies. I loved the countryside and I was in love with Vincent. And because one loved Vincent’s work, it was an encouragement to go on.

A wonderful landscape wherever one looked and in the village lived colliers who worked at the Point of Ayre Colliery two or three miles away from the coast. Painting in the open air near a cottage, I heard women singing beautifully, not snatches of song but complete melodies. I cannot tell you how much the character of the whole place and the people fascinated me.

This broken-down wagon was so beautiful. It stood in the stack yard of Owen’s farm in Llanasa just below Trelogan and was entirely painted out of doors.  When I asked Farmer Owen whether he could leave it for a while he thought I could paint it in halfan-hour. The half-an-hour became a week until he began to tear out his hair, poor man.  But I managed to do this. The blacksmith’s shop was across that meadow and I would hear all the time this wonderful ‘clung, clung, clung’ high-pitched, metallic, bell-likenote of the blacksmith’s hammer. I think that this was the first thing in which, in a small way, I was able to learn consciously from Vincent. But I’ve never been happy working in a conscious way from another man. 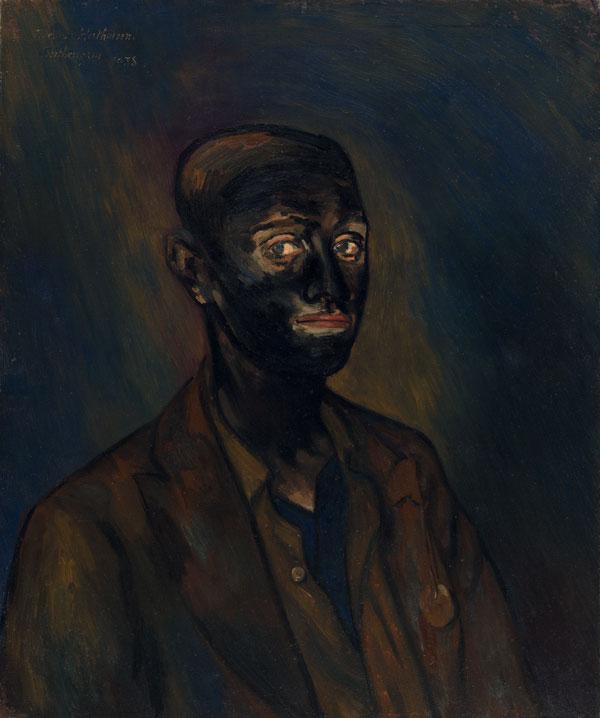 In the evening, I would watch the colliers walking back from the Point of Ayre Colliery. It was the first time I’d seen these fellows. They came into that village absolutely black so that until eventually I came to know them and saw them washed, I couldn’t recognise them as being the same men.

Sometimes I would just begin to ask one or two colliers if they would sit. They simply laughed. They thought it was the funniest thing and disappeared into the Afoncoch.*

These colliers were wonderful to look at. They all went to Chapel and sang like mad. And almost without exception, all the children played the piano and were marvellous musicians. I used to listen to their singing; and I loved being with David Lloyd.* He would say one evening ‘We’re going to have a choir practice in such and such a place. I’ll take you along.’ He had a little car, or we would go by bus, and hear these colliers singing wonderfully – the very same men from the village whom I’d known on nodding terms.

When I returned to London with the collier paintings and drawings, I was at once accused of being a Communist. A collier’s is not at all a happy or enviable job. It’s a terrible job. But the reason why I drew and painted these men was simply because, to me, they looked remarkable.

*Afoncoch pronounced ‘A-Van-Gogh’ is Welsh for ‘Red River’. The local inn was so-named because it stood by the road above which the Welsh and English had alledgedly fought with such ferocity that their blood had fl owed down like a river.Van Gogh’s self-mutilation and suicide, also Albert’s deep feeling for Van Gogh, make the inn’s name eerily coincidental. 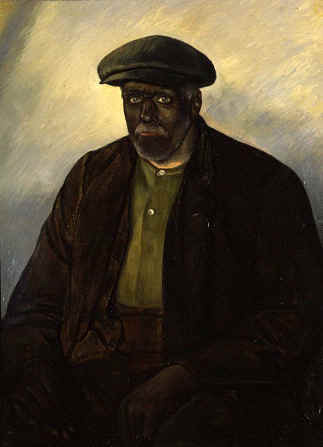 Late afternoon, walking down this summer white road towards Llanasa, in the far distance I saw a small figure black from head to toe walking slowly home up the hill towards me. I had seen my first collier. We greeted each other, “A Grand day”, he said, and I thought how of all this brilliant day he witnessed a setting sun, and, later by the lamp at the Afancoch Inn how he was whiter than a townsman. He was William Jones. I found a small shed and painted his portrait, for light I sat by the door, many came to watch, crowding the door until one could no longer work. When his daughter came to look at the portrait she said ‘I have sewn different buttons on his shirt! (“Portrait of a Collier” Graves Art Gallery, Sheffield)

I recall this since it helps to explain things about the portrait you have and about which it is difficult to write.

I first saw William Jones coming up a white summer road. He was walking very slowly because he was an ill man. I’d never seen a man so saturated with coal dust. He wore a very old and worn suit. And the man, his cap, his hands and his face – everything in him as it were – was the colour of this blue-black dust. When he came up to me and spoke, I saw more clearly the whites of the eyes and the colour of the lips. The white skin drawn along the edges where the spittle had constantly washed. The ears were pink, not entirely coloured; and because the hands themselves were so black, the nails looked like exquisite tiny shells, except that underneath the nail, was this great half moon of solid black.

It was how he looked that amazed me. And I’ve never really been able to draw or paint that as I would like. I had no money to pay these chaps; and in any case, when you come home from the pit there’s only one thing you want and that’s a bath. William Jones was the first collier I painted. He was a quiet and gentle man and not long afterwards, he died of consumption. 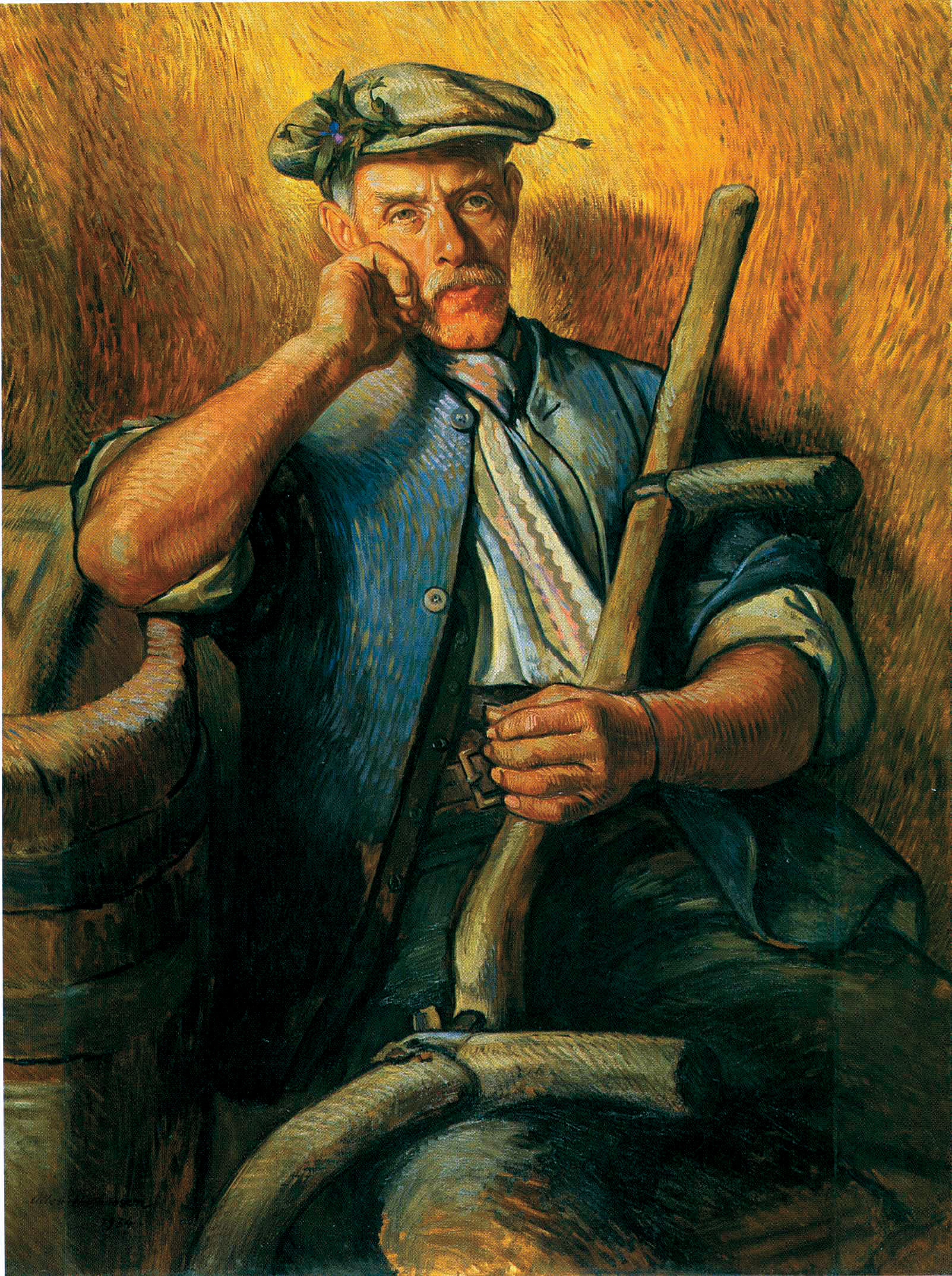 Farmer Jones was convinced that the blue cotton wool wound round his left wrist prevented rheumatism. 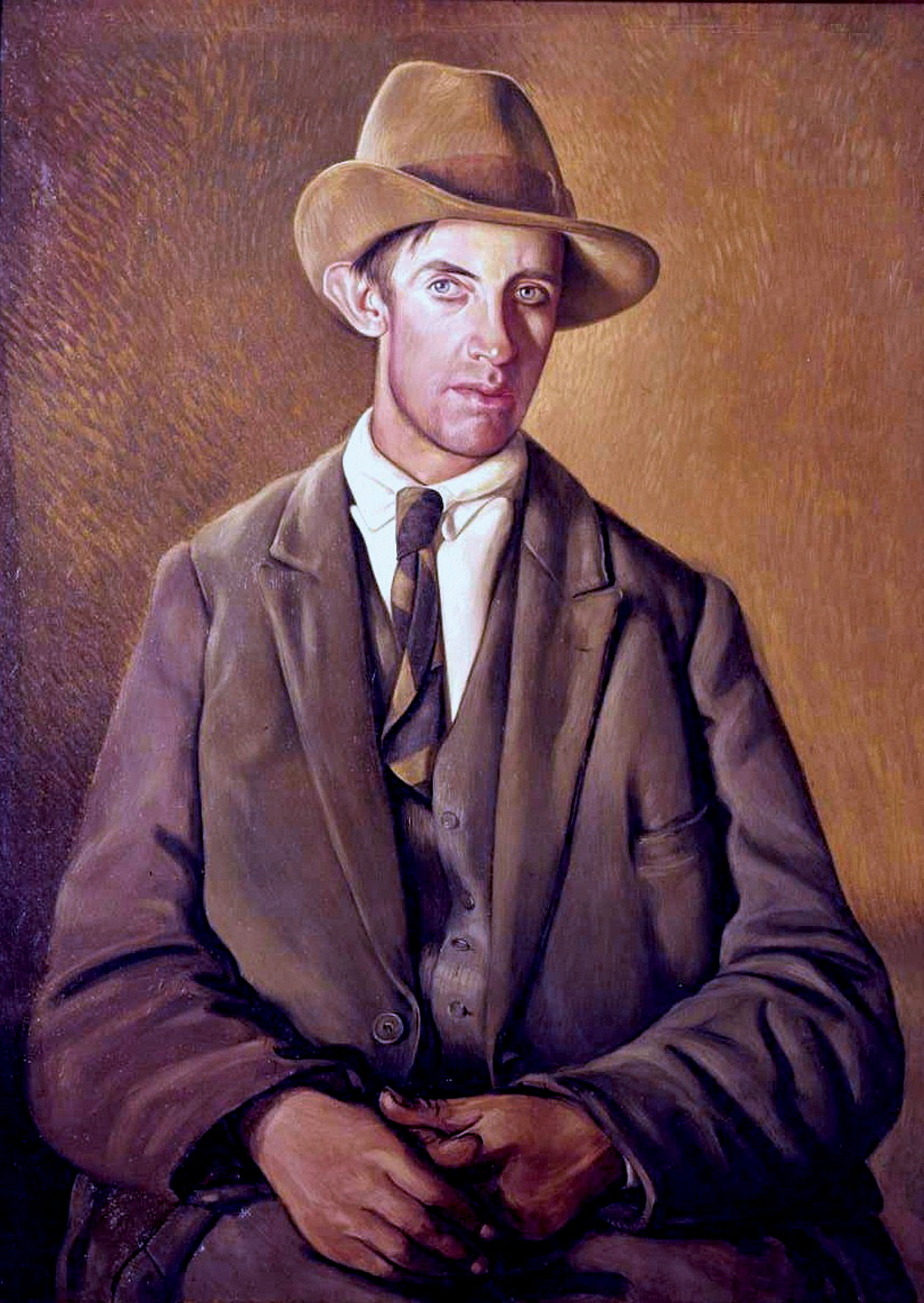 Harry Jones was a good, decent sort of fellow. A very powerful young man and it was quite frightening to meet him in a dark lane at night. Through inbreeding and for other reasons, Harry wasn’t quite ‘all there’. He spent most of his time carrying huge loads of wood which he had collected; and that was how he lived. He wore other peoples clothes; and when he came to model for me, he had on a false shirt-front with nothing underneath. His pockets were all filled with empty cigarette cases. The other thing is the ghastly alignment of his ears and the incredible hat, like something out of Peter Breughel. He looked past whoever interrogated him. He was a frightened man, reduced to this state through being retarded and battered about by the village kids, his father and brother.

For a time I was shunned by the village for having asked him to sit. First of all it was thought that I was making fun of him and also, if I could take this poor boy as a serious subject, other farmers and colliers thought that I placed them with him. And after this I had great difficulty in finding other models.

Letter To the Tate Gallery

I painted other canvasses and made various drawings; and always people came to watch. Then one day, I saw a really fantastic figure carrying a great bundle of wood on his back, and later this young man, Harry Jones, came to sit for the portrait you have. He sat four times, but now no one came, and after this I had great difficulty in finding other models. A village funeral was a procession with the coffin on a farm wagon, but alone, quite apart and leading the way, in a long black overcoat and bowler hat, carrying a bunch of wild flowers which he had gathered from the hedges, was Harry Jones.

As I send you these notes I think of my long ago delight when the work first went to the gallery.

Can you imagine trying to paint this thing in a tiny shed? Many, many times I used to walk round with Will. Sometimes we would stand still and Will would say ‘What the hell are you stopping for?’ There might be a marvellous tree-trunk covered with ivy standing in a particular light against a dazzlingly white cottage. And I would try and say something about this having an ivory-like quality. ‘I can see bugger all’, he would say ‘Come on, they’ll be closed by the time we get there.’

I was taken to the Afancoch by William Lloyd, but I couldn’t drink as these people drank. I made no bones about it. And they all understood this. These colliers used to drink like fish. It was astounding.

If their glasses were filled and mine half full, there’d be shouts of ‘He’s gaining on you Will.’ Then when Will had downed his there’d be shouts of ‘You are losing I can tell you.’ I used to stand the colliers drinks but they weren’t interested from that point of view in sitting for me. The only thing was to make small notes because when you go into a pub with colliers, there’s only one thing to do, and that is to drink. 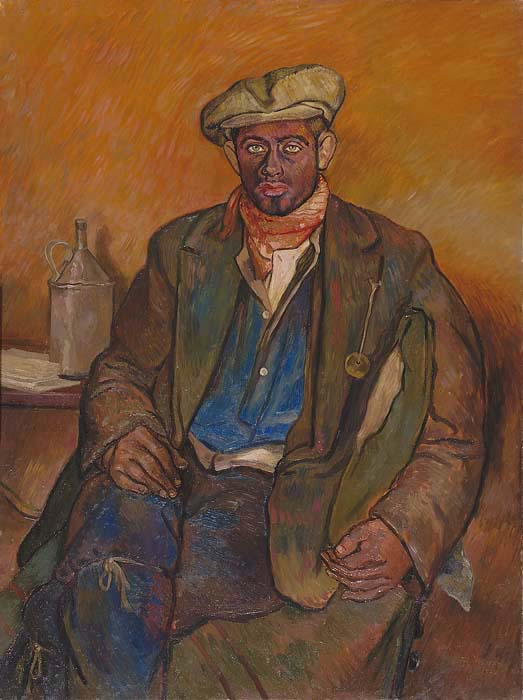 Jo Parry happened to be one of the colliers. He lived down the road and we came to know each other. One day I saw him being carried home on a stretcher. One of the most pathetic things I have ever seen was this collier lying on a spotless bed, in his heavy clothes and boots, absolutely black with his hands and nails knocked about and cut. He’d been crushed between two trucks. After he’d recovered, I would see this extraordinary figure coming up the road. These colliers were all amazing looking; and some of them were just powerful hulks of men. It wasn’t that one was more remarkable than another. But Jo was more sensitive. I asked him whether he’d sit for me. ‘Oh yes, I will’, he said. ‘But you must just let me go into the house first’. Then he would take off his top things and put on this spotless white vest. To these people I was an awful bore; and I knew it because not only couldn’t I pay them anything, but it took precious time from them. I don’t think Jo sat more than two or three times and even then, on every occasion, he used to doze right off. So all I saw most of the time was the top of his cap. We talked about all sorts of things. He was at that time making notes in relation to his attempt to become a lay preacher.