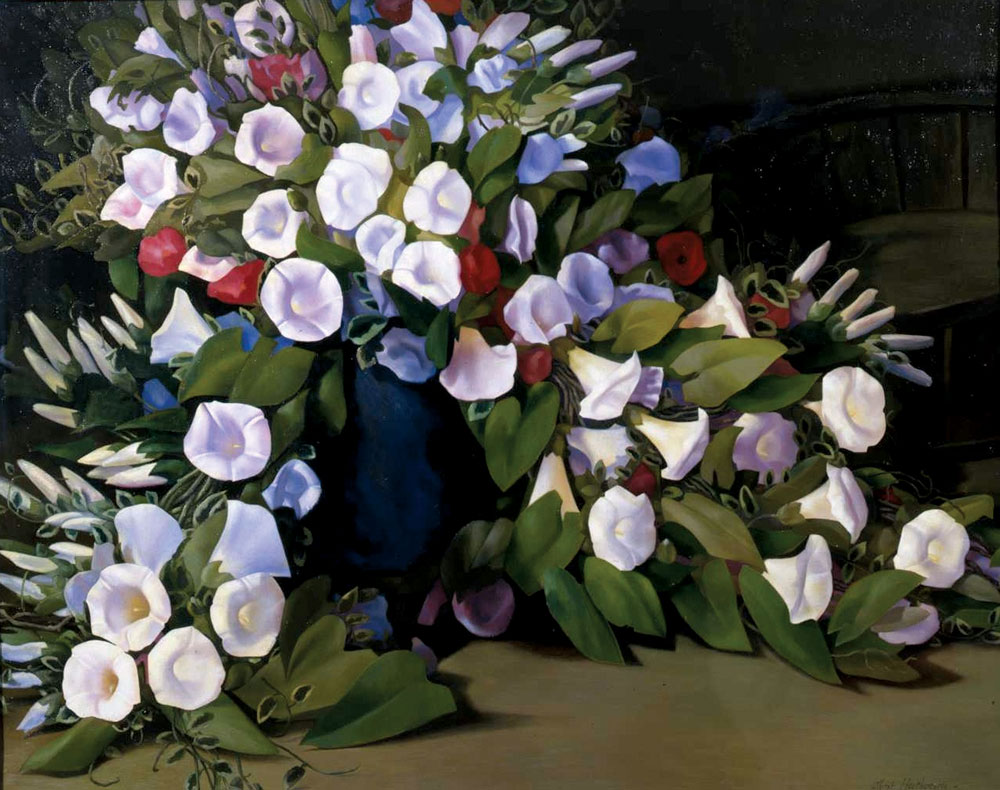 I was mad about these peonies and convolvulus flowers 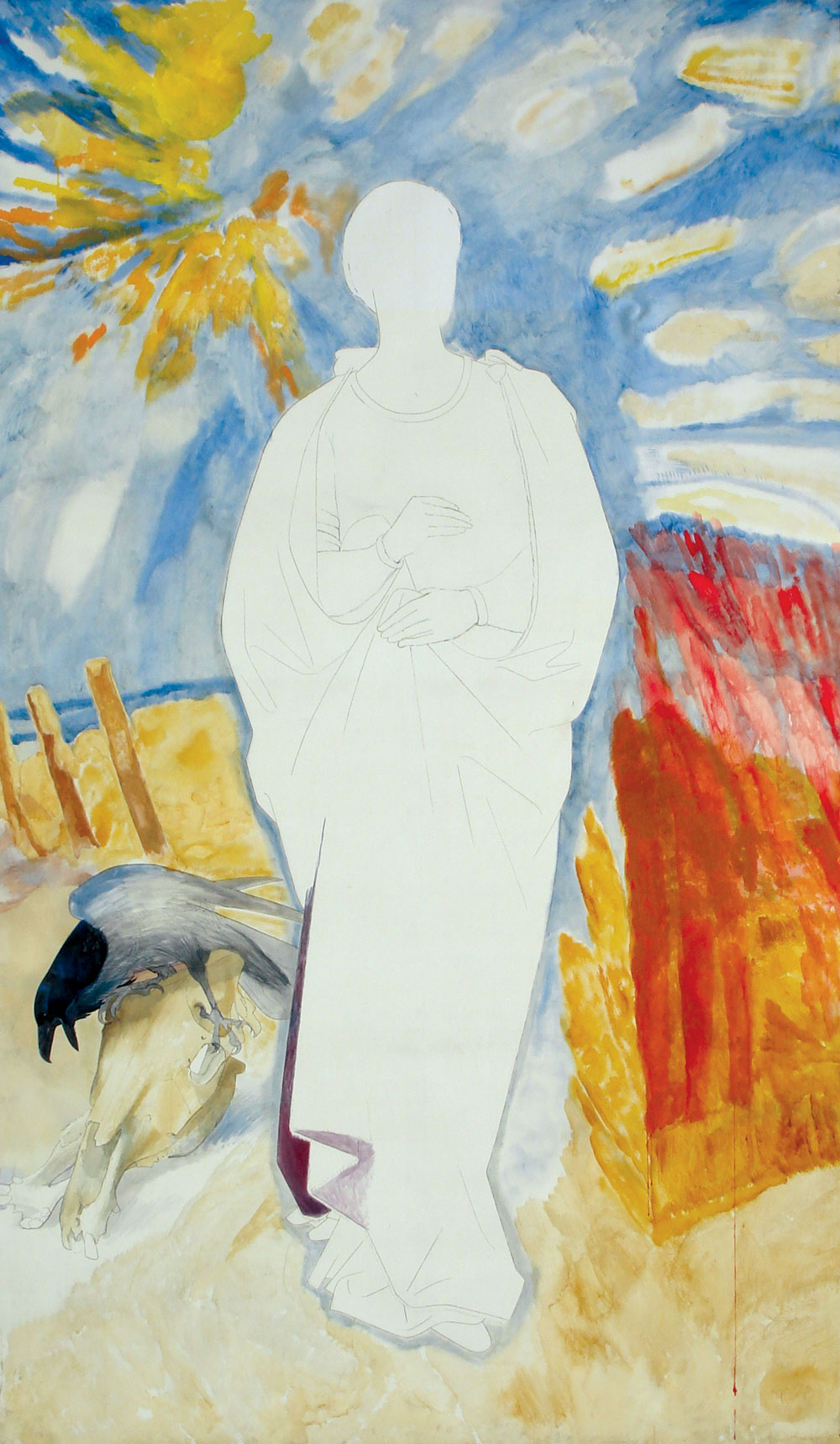 One had to work in every sort of place. And the first studio I ever had was at 37b Greville Road in St John’s Wood. I was beginning to get over an ulcer and I cannot tell you how happy one was to have this place. I thought ‘Now we are here in this marvellous studio – this big room with a whacking window – I shall paint a large symbolic figure, something over life-size.’ This figure, rather ominously, was going to be of ‘Winter.’ But I envisaged not a grey picture but quite a colourful thing. The figure was going to be holding a holly branch; and  I was going to have red in it, symbolic poppies and so on. Kate was posing when I drew this during the first sitting. Of course already one was very worried about the whole situation. It was foolhardy, in a sense, to startan enormous thing like that or hope to carry on because one’s foreboding was of war. Yet I thought ‘Well this is what life is and one must try and go on.’ I drew it out on a canvas. But the sirens went and the bombs began to fall. 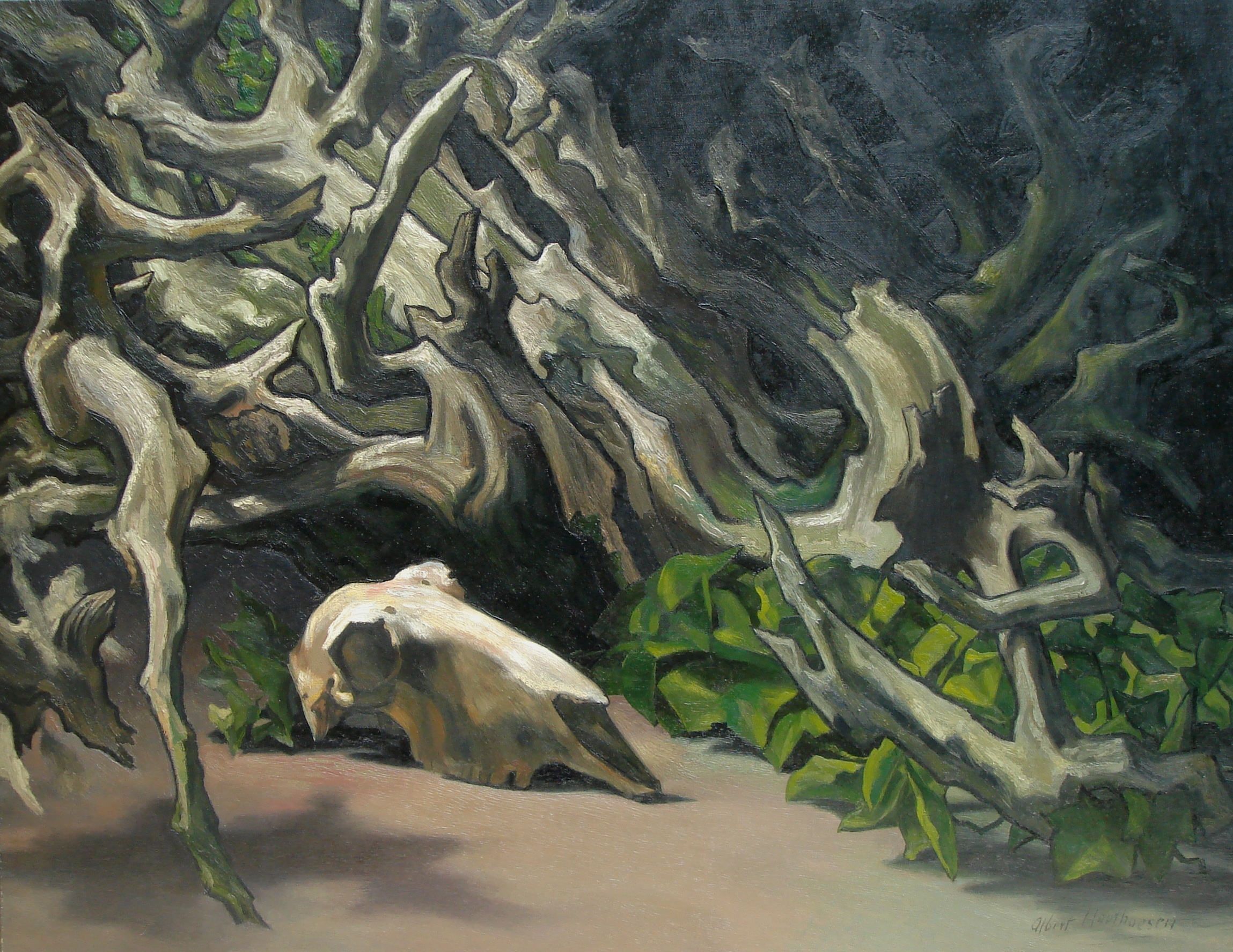 I thought ‘Well, first of all one has to try and keep sane. And the only thing one can do is to keep going with one’s work.’ I knew I would be quite unfit for the army. I remember walking into a barn on a farm in Letwell, called South Farm. It was a large barn and very blue and dark inside because the great doors were closed. There was a small window and another door on the south-side. On the ground, which was also blue-grey in colour, was a sheep’s skull and a fragment of a huge yew-tree root which they had dug up. I just painted these things as they were. It was a very broken-up time. I carried these things around with me and whenever I had the chance to do anything I did. I just clung to my drawing and painting.

With his particular character, I can imagine a painter working away during a very terrible time. I can imagine a city is being bombed; and in his underground shelter or whatever it is, the painter goes on just drawing the people who happen to be there around him.Or being an imaginative fellow, illustrating a Greek myth – war or no war. 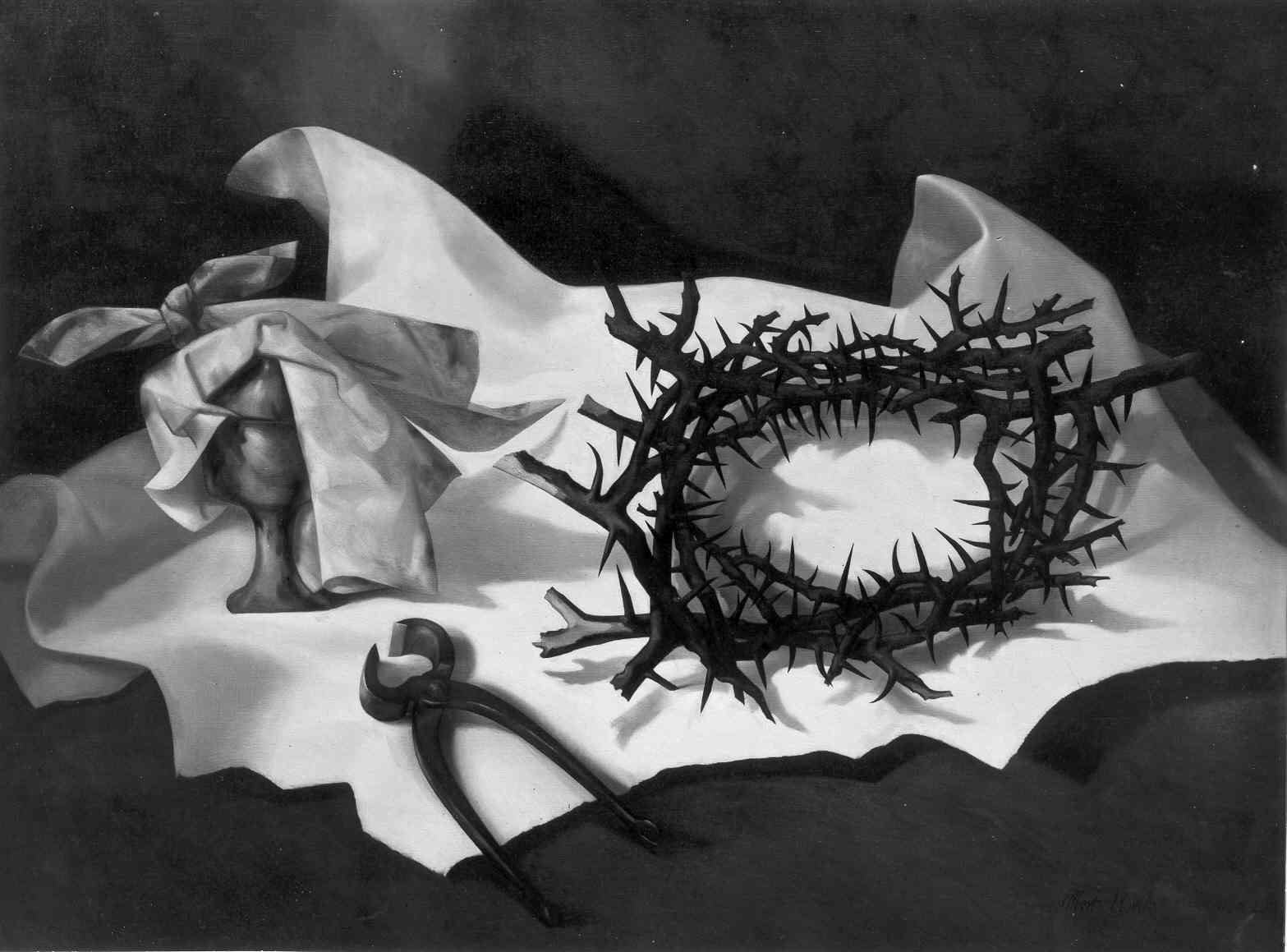 It is difficult to describe how sad one felt. One saw that the world couldn’t possibly be the same and indeed it isn’t. Very few people have any religion. And I can understand how it has gone. I had, even up to the last moment, hoped and prayed that there would come a point where Hitler would stop these advances. One was appalled at the blackguards and the knowledge that the Hitlers and Company were simply criminal adventurers in power.

The Magdalene’s ointment in an old tin jar. The blindfold and the cloth with which the feet were wiped. I imagined that large piece of cloth as part of the winding sheet around the body. The picture is really black and white isn’t it? It is difficult for me to talk about because I don’t want to talk about suffering. But if you think that this was painted at the outbreak of that ghastly bloody war; and that one saw what was coming and also knew that one’s life would be completely changed, then that’s what this is about. 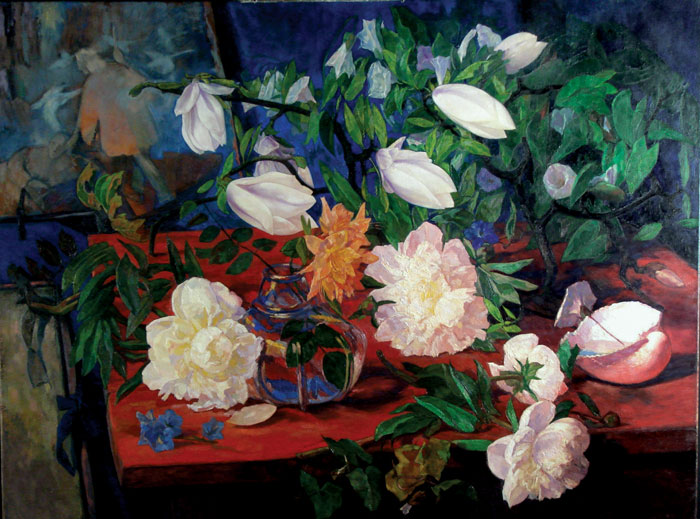 I was rejected from the army on health grounds. I was no good – Grade IV

, the lowest I believe. I was examined in Mansfield and there we all were, around fifty men, with just our trousers and shoes on. I was shocked to see how pathetic this man looked, and how old that one looked. And what a gnarled, emaciated worker, or what a tough, powerful young man or a broken man this one looked. Then to realize that this extraordinary, motley crew of men were all born in the same year, really put the wind up me.

Voyage in St John’s Wood and carried on in Letwell, Loversall, Tickhill, Chatham Street, Oxted; and then fi nally here where the shell and convolvulus were painted.

Working on it again and again, even sometimes during a migraine, helped to keep me sane. The magnolias against the blue were the fi rst things I painted. It wasn’t changed in a large way, but in such small, subtle things, all the time, which made a great difference. I like the way the title is in French as it is in English. This magnolia is beginning to open. This one is more fully open. This one is really open. And this one is going. The figure ‘Fate’ carriesout these shapes. A picture like this has its own law and these shapes make themselves.

Before my medical examination, I had thought it would be a marvellous idea if I could be employed in drawing and painting colliers. I wrote a letter of application, in relation to being a war artist, saying the chances were that I wouldn’t be fi t enough for the army.I was invited to bring along a portfolio and the next thing I heard was, as usual,
‘Dear Sir, We regret………….’ 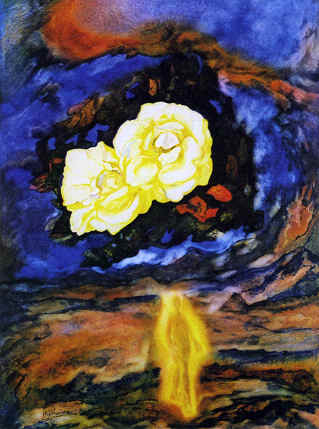 When Cath and I moved to Tickhill, we met a carpenter called William Green – a remarkable character. He was a highly nervous man who really wanted to be a painter. Various things in his life had stopped this so that just the very idea that I tried to draw and paint drew us together. William would come home latish in the day, wash, have his tea, and sit down for a few minutes. And then, until daylight went, he would work like a maniac in his garden or shed.

William was the only one who sometimes came into our cottage and saw what it was like. But there were a lot of people, for instance, who thought I was away from the Plant because it was more amusing to be away. One day William gave me some roses and I began to paint Somnambulist and Anvil. They didn’t take twenty-three years. You have the things by you and you pick them up and pick them up. Everybody else goes mad. And there you are still working on the same watercolour.

It was a terrible thing to see the planes going over, to think of the marvellous young men on those bombing raids and know perfectly well that many of them wouldn’t come back. And that it was going to be ghastly at the other end. One day I thought ‘I’m always clowning for friends, trying to cover things up, so I’ll give up clowning and start being a clown through some drawings.’

The first clown act I saw as a youngster was of a girl in tights, all very ‘piquant and shishi’, handing a juggler a pile of plates. To a roll of drums, he began juggling with them. One, two, three, four, five, six, seven. They went higher and higher, whirling like mad, and he was this Jacob’s Ladder. For one moment, he looked up thoroughly alarmed and the whole thing crashed, smashing all these plates. It left me aghast at the thought of all the expense.

These sketches at the Doncaster Theatre were the first real clown studies I did. The Hermans were a family of Russian Jews who were all musical clowns. I used to go round at the back and tell them how marvellous I thought they were. They couldn’t quite understand this because nobody else bothered. People rolled in, laughed like hell and went out. 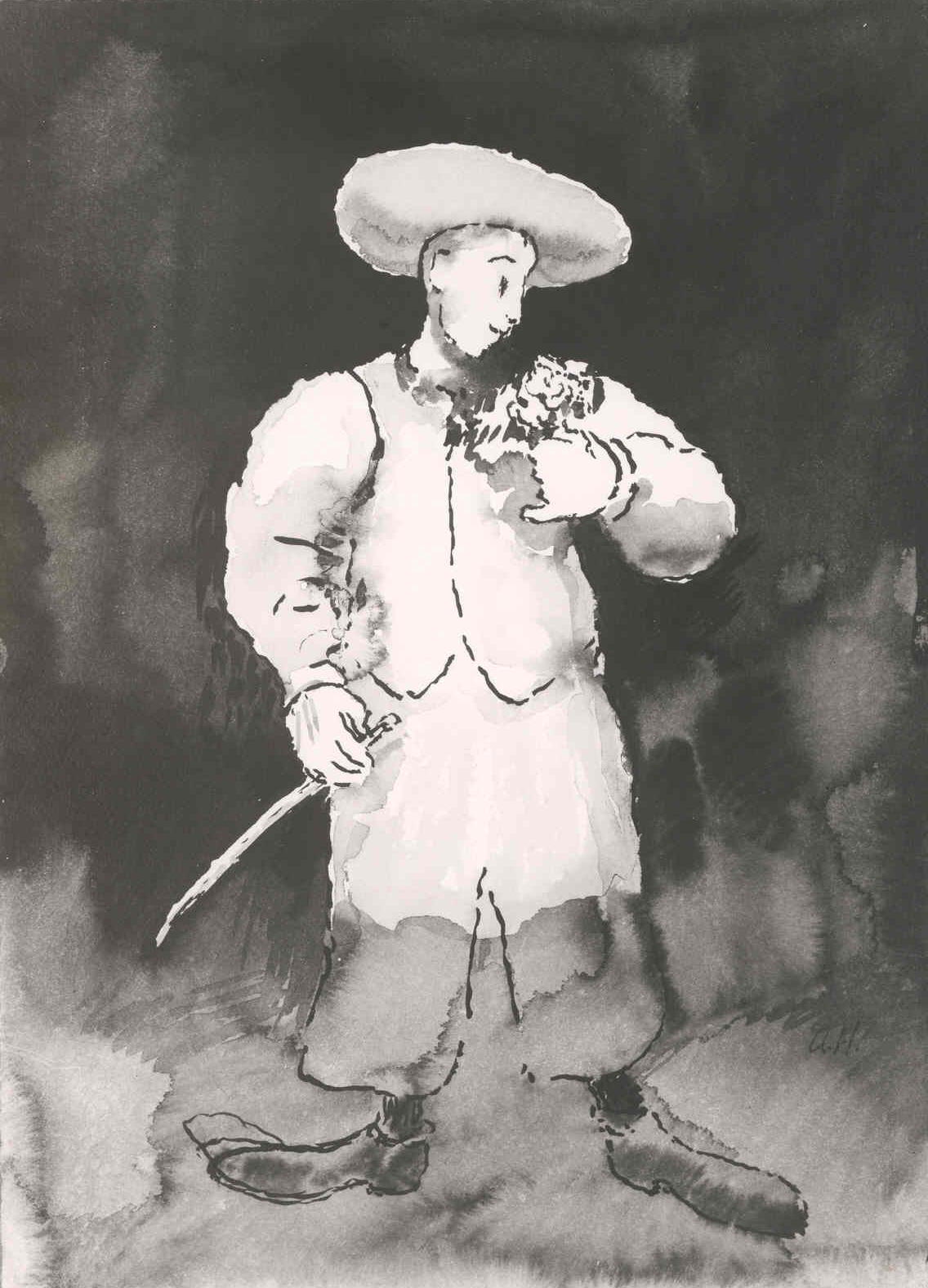 Do you get the idea of this terribly pathetic fellow? He was in fact pathetic and very poor. His wife for instance took in the washing of the company to help keep them going.