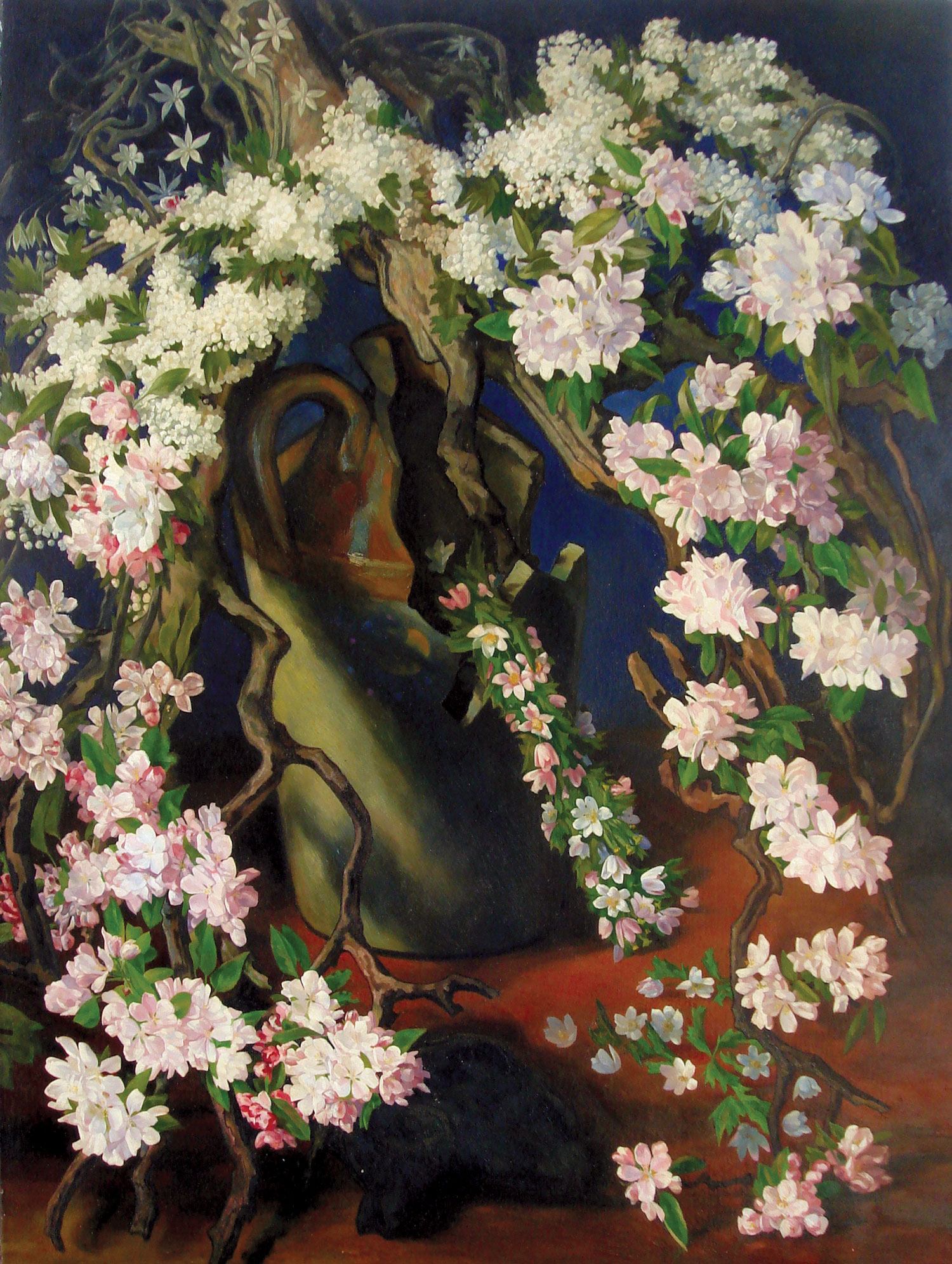 I had started this before 1940 when I had thought of painting a whole series of smashed up jars I had collected. Through my being ill, this broken crock was seen as a dead thing carrying these branches that looked literally dead and yet were flowering. And this main idea of something that has just come down or been torn away came to me at the Plant.

What is so strange to me now is seeing this black and white photograph held like that. It’s just like the sky, a dark sky with light clouds, dark rock and the sea and foam. It could absolutely be the foam dashing against the rock and travelling across it. It’s inevitable that there are these similarities since these things are painted because they are oneself. You see this branch which, in spite of everything, somehow tries to flower, is me carrying my troubles whatever they are.

There is a very curious story which has just come to me. Shortly after the war, I thought I would send this picture to the Royal Academy, but it was rejected. When I had collected the picture, I leant it against the wall. I have always had a feeling for the oddness of the life of a picture. To see a thing that one has made and worked over – it’s really a very private thing – standing on the pavement, was like seeing some beautiful piece of china that had been knocked over.

At that moment, a little girl of about ten with a small brother and her little sister of about six, wonderful Cockney kids, came by and they stopped dead in front of the picture. The smallest child walked forward, pressed her grubby fingernail on it – I saw the canvas go in – and said ‘That belongs to Jesus’. The older girl said ‘Shhh’ and hurried her away. There is something innocent, I would say, in the picture and there was some innocence in the child that perhaps linked it with putting flowers round a plaster statuette or something like that. Anyway I was delighted with the little girl for saying such a wise thing.

One would like to be able to explain and talk about these things simply. But in fact the reason why something like that came about is quite complicated. There I was at the Plant, loathing the very idea of war, yet having to do this idiotic work. And I had been thinking a great deal about Saint Bernadette.* She did have a vision whatever one may think.  A little while before, I had seen this extraordinary little photograph of her which I had pinned up in my minute workroom in Tickhill. And it is possible that something of the thoughts of this mystery gets into one’s work and into one’s being. What I mean is I’ve never had something like that said by a child or anyone else over anything. But I did over this.

*In 1858, Bernadette Soubirous, an asthmatic girl of fourteen, was collecting fi rewood on the edge of Lourdes for her homeless family. Beside the grotto where she stood fl owed a stream. It was there that the Virgin Mary fi rst appeared to her in a vision. And told her to drink from the waters. Bernadette tasted only mud but a spring of cold, crystal-clear water bubbled up. Pilgrims began to fl ock to Lourdes as news spread of the grotto’s healing waters.St Bernadette entered a convent and died in 1879 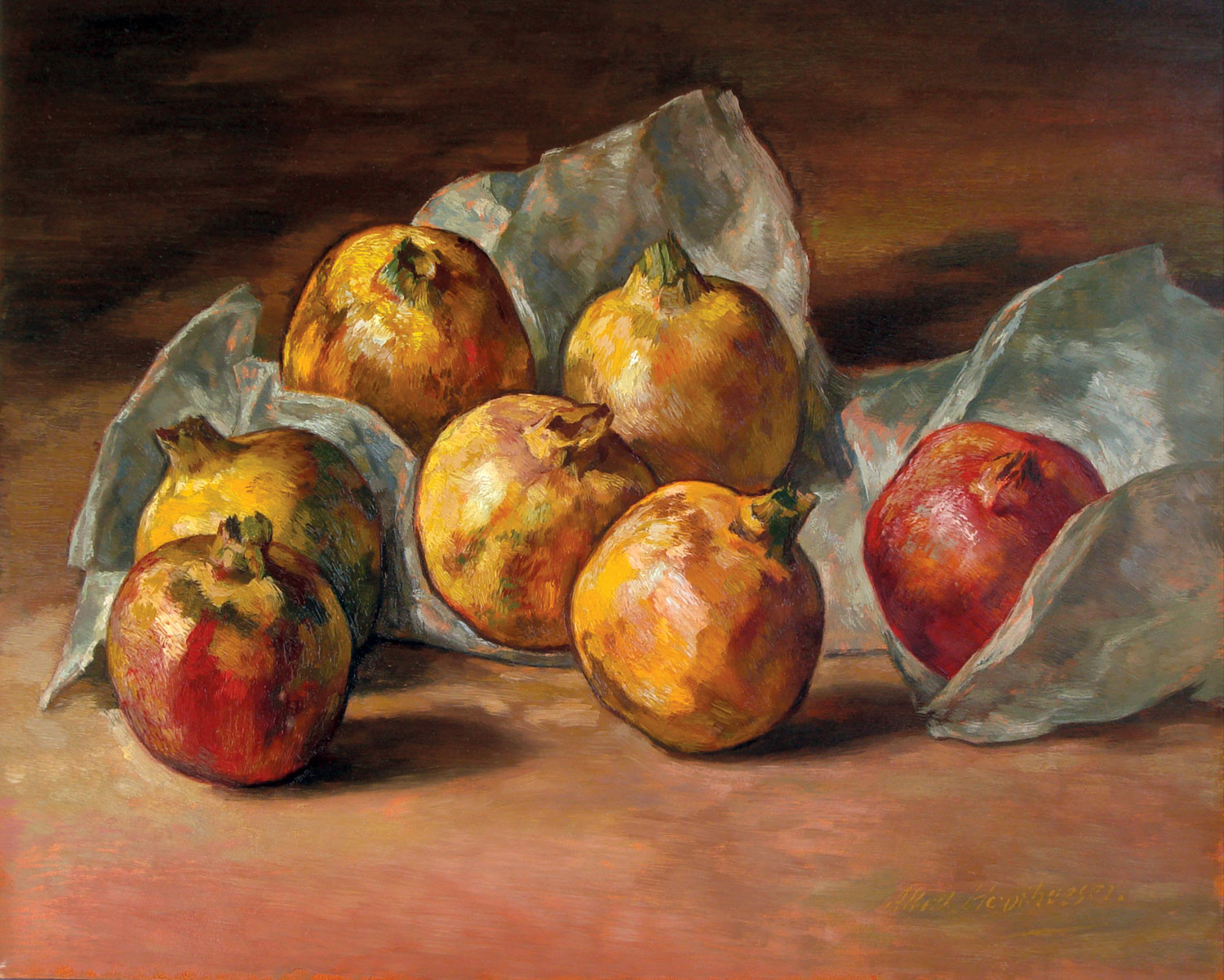 Being back in London was in itself wonderful. I wandered round literally through sheer nostalgia. I walked and walked and walked – everywhere. The East Street Market in Walworth was one ruined shop after another;and people simply improvised boxes and planks as counters for selling their wares.There would be some little unclaimed ruin and some amazing chap selling shoe-polish and laces. In the corner would be a trunk lying upside-down and cushions left from a fallen ceiling; then a burnt-out staircase all-to-view.

It was incredible scenery – the vitality of it all, the improvisations of people going on with  the work of the day in these ruins. There were all sorts of people who came and went, just as it is when one walks along the street and you rub shoulders with everybody. I think that at this time one did become a little freer. But for all that is worth, I would have become freer without the disaster. One can’t, in a way, separate any of these things. They are all inextricably linked.

We bought fruit from a marvellous Italian cockney greengrocer who worked round the corner. One day he was passing the workroom window, this western window through which the sun poured. There was no curtain and he could see my easel, so I felt I must show him the picture. There was a tremendous business of miming; and he was saying ‘Ah, very good, very good’ and we got to know each other. I bought fruit which was unripe and tough. He understood absolutely what one wanted.

I’m always amazed when I pass the greengrocer’s and see these boxes in which the fruit is kept apart with pieces of purple or violet or light pink tissue paper. Seeing grapes and pears and peaches wrapped in these papers, reflecting the colour and light is, in itself, a most beautiful sight. It links up with other things.

here was a dancer called Juanito Garcia, a dwarf figure, who hammered it out with tremendous power. And there was Ana Nevada. She was a remarkable looking girl and a beautiful dancer. In this particular thing ‘Los Caprichos’ I have never heard castanets speak as she made them speak. She was far and away the best of that company.

The little Spanish Ballet had this deep traditional idea rather that some lightweight amusing thing which filled in ten minutes. And since the artists were good – and I must underline that because it wouldn’t otherwise have come home so forcibly – I saw acted things that I had myself experienced in a very different way. It was really my Mama and it came home again and again, so terribly and incredibly. For Cath and for me, it was the story of how our marriage was too much for Mama. You either survived or you were wrecked. That’s why I made these little notes and why they mean so much to me. 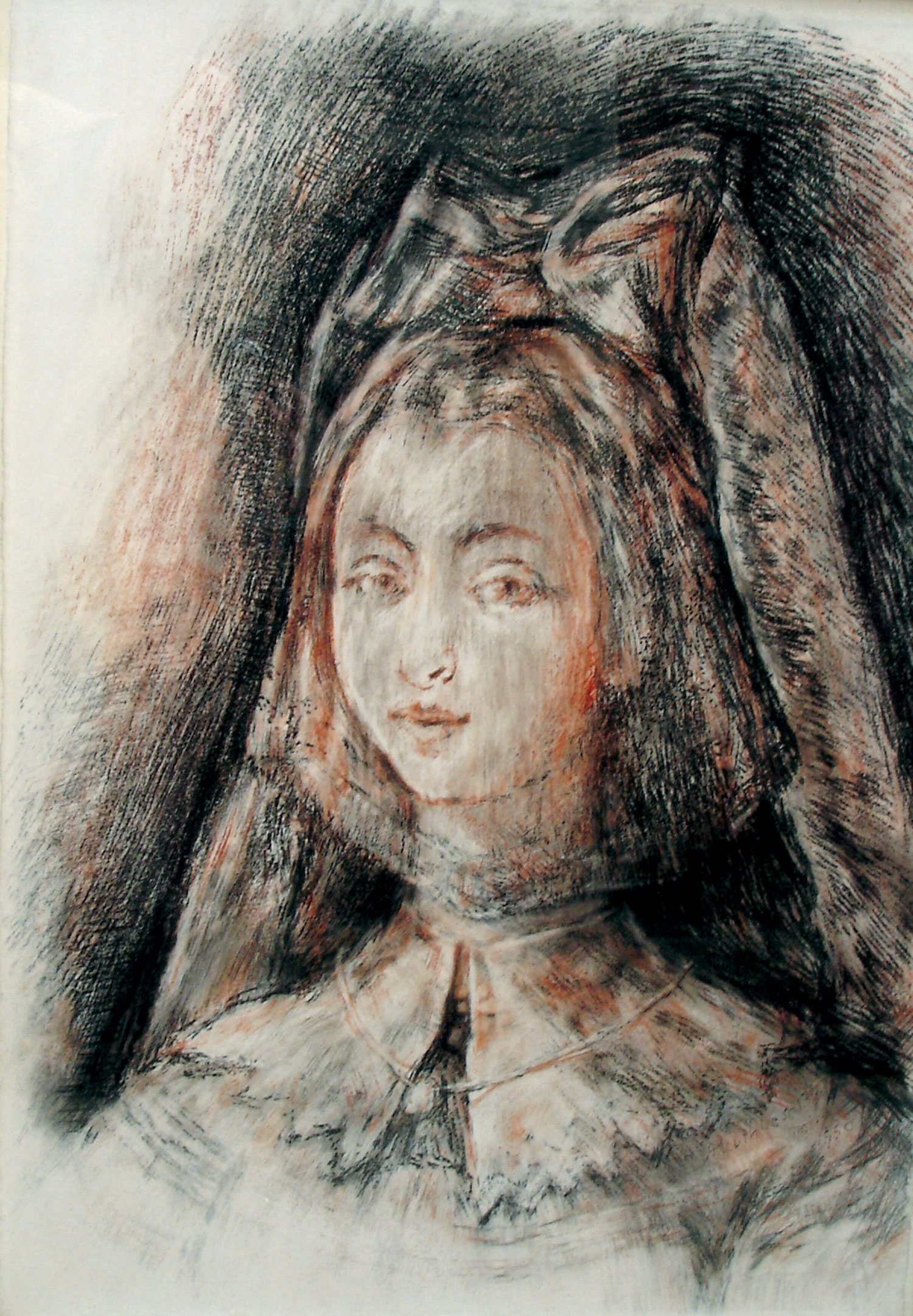 The mother’s over-guarding of her daughter, and her inability to see that anyone could want simply to congratulate her daughter on her beautiful dancing – that she couldn’t get around that point and was herself such an incredible ‘Duena’ – was so unbelievably real. I think it was what wrecked that girl’s career and why one never heard of her again; because she was never alone. And an artist must stand on his or her own feet; otherwise it’s like having a millstone around one’s neck.

Nevada was a beautiful creature to watch - a sheer delight. She always brought the house down. In ‘Los Caprichos’ she did this fire dance beautifully and I simply marvelled that having made such an impression and been so remarkable, she goes out just like a candle and nobody notices that she’s gone.

I’ve seen some very remarkable ballets and I’ve been moved to tears through steps that I’ve watched because they have, for me, so vividly portrayed the emotions which one has experienced oneself. That’s why these dances have come about. They’re based on fact.

At the time, one only thinks of the dancer and the movement. Afterwards it may look like a wave of water going over a rock. But at the time, one doesn’t have that complicated sort of thinking.