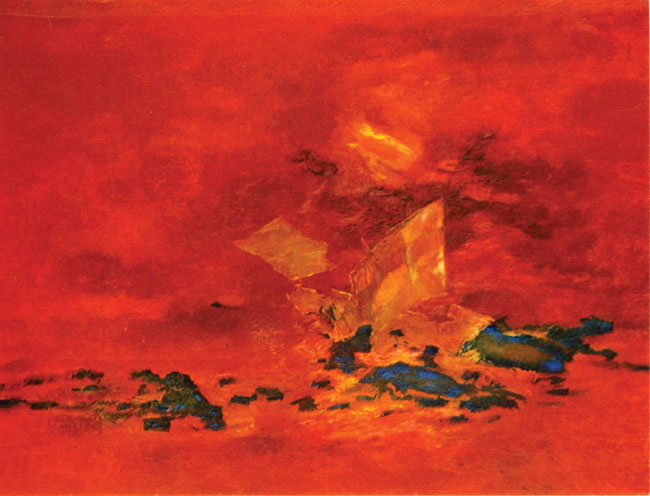 This is as I imagined a junk to be which is wrecked on these rocks. It took three weeks to paint and I call it Wreck of the Early Hope. It is in relation to my struggle and finally getting here. As a child, these boats attracted me. I must have seen them on small coloured Japanese prints that Father had. It only struck me the other day that this picture and the Icarus may also have come about through these great red lacquer screens and chests which I first saw at Fry’s and loved.

I think these junks are so beautiful. And I have always thought of them as being something very ancient, very primitive and very frail. Yet I have the feeling that they are as eternal as an autumn leaf which curls up and becomes like a thin brown sea-shell. And remains so for years and years. I marvel at the journey these incredibly frail-looking boats make. When men have been such fools at possibly to knock this world to pieces, so that there may not even be the metal boats we have, then – if people survive – these wooden boats will come again. To me they are at once fragile and eternal.

As a study, this junk would be very wrong. It is the fragility of this shell-like shape held hard on these rocks which to me is the wreck of my early hope. And I like to think that this light which travels all the way round and gives it this shape is symbolic of the fact that though one may be a wreck, one has attempted to do something. That in itself is a sacred thing and one’s duty. 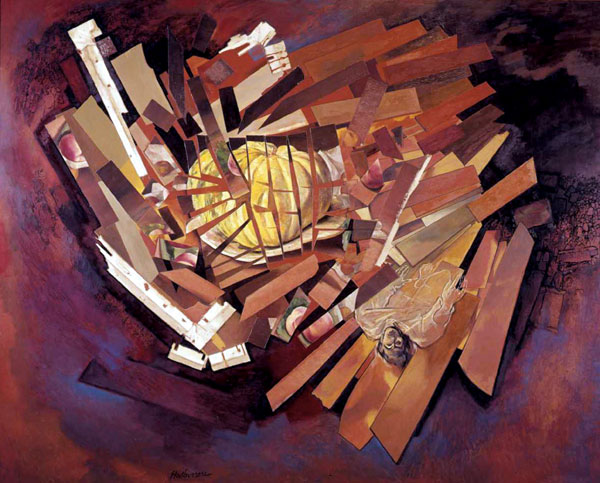 After an operation I destroyed a number of drawings and paintings. Much later, returning to the workroom, I found everything in it covered thick with dust. As I picked the fragments up, each canvas shape made a clear silhouette upon the worktable. This was made from one canvas. Lying alone in the antechamber, hearing snatches of a conversation in French ‘a toute a l’heure’ were the last words overheard before losing consciousness.

Written by Albert on the stretcher and dated Aug 3rd 1967

The nurse had said to me with such alarm, ‘Pourquoi à toute à l’heure, cherie?’ And this picture came about very much through that particular experience and the odd over-hearing of this flirtatious conversation between the girl and the anaesthetist. She shouldn’t have left me and she came in and said ‘Oh, how are you, Mr Houthuesen?’ I said ‘Pourquoi à toute à l’heure, cherie?’ It was only my intention to pull her leg, but she was terribly alarmed so that the conversation itself must have been pretty serious. Perhaps it’s just as well that I didn’t know. Certainly it wasn’t a very amusing moment for me to be alone. It was a terribly hot summer and the anaesthetist, a wonderful looking young man came in, with a tight-fitting white cap, white boots and just a vest and apron – bare arms. We were on the top floor of the Gordon Hospital, and I saw all this against the light of the window with the tower of Westminster Cathedral behind him. The next morning when the same nurse came into the room, I said – not really realising what was going on – ‘Aha, à l’heure, à toute à l’heure ma cherie.’

But for modern surgery, I wouldn’t be here now, and able to talk my nonsense, sitting in this warm room with the cat occupying the armchair. One is eternally grateful to these dedicated men and women. There are saints among them.

Up to the time we came to this house, I’d never really sold anything. I was getting on and still I hadn’t made a mark of any sort. After the operation, I was very weak. It’s rather dreadful to weep, through sheer weakness, some part of every day for eighteen months. But I have always had such a desire to draw and paint; and were it not for this, I think I would have gone long ago.From one point of view I sincerely hope I don’t paint another ‘A Toute à l’Heure’. With that canvas, in a small way, I had my say. And if I were going to say something about it again, it would be said in a different way. 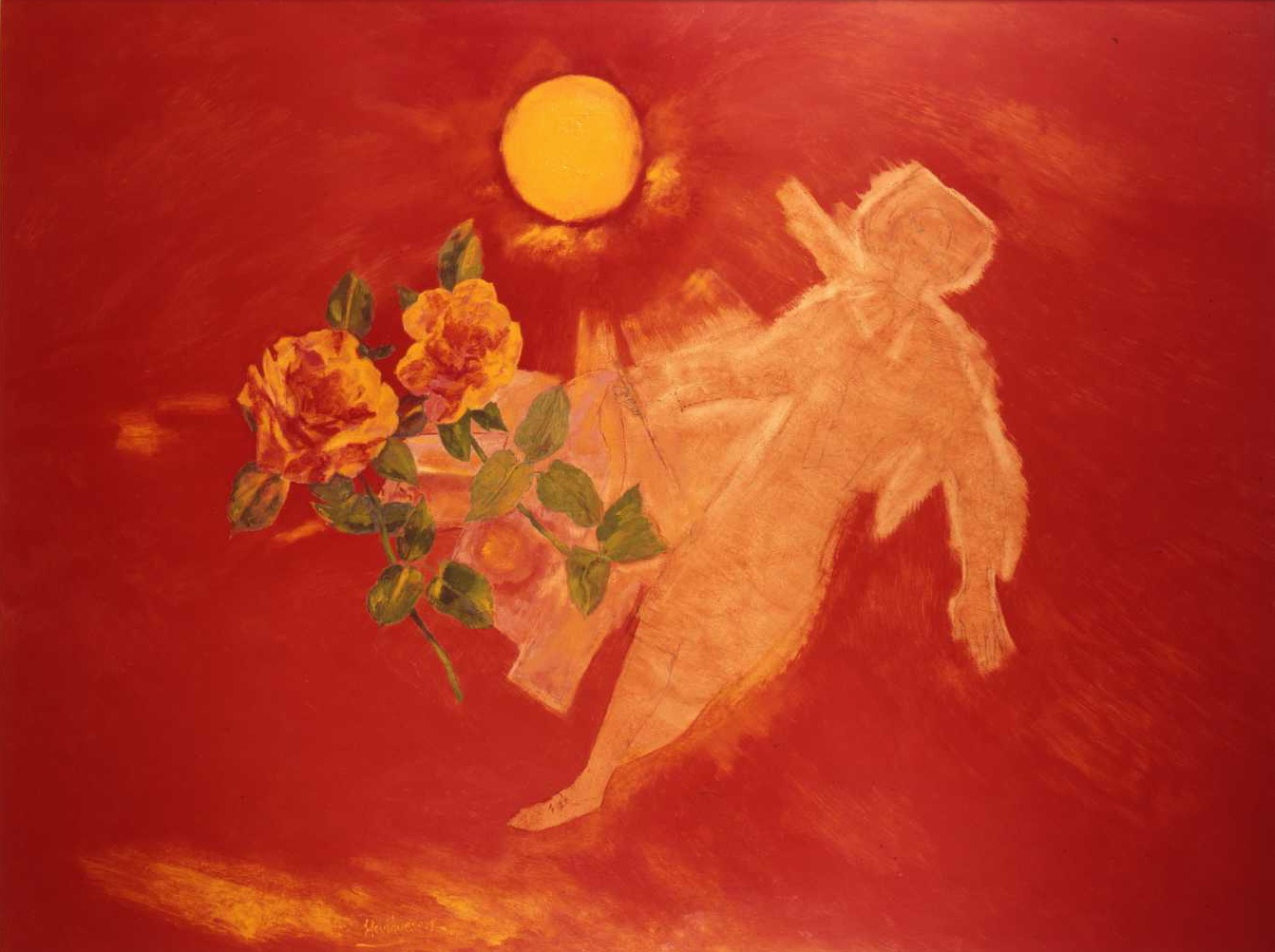 This Icarus panel was begun after I came out of hospital. It is painted with casein tempera. I’d worked in oil most of the time and one day I looked at casein tempera and painted some small things with it and loved it.  It is Talens from Holland and beautifully ground – a very rich and lovely medium, as all these mediums are. The marvellous materials one is offered today. They’re like modern medicines.

For me the sun is a symbol of life and hope. The power and beauty of it inspires me absolutely. Yet to be in it withers me and I have to be in the shade. Like the sea it terrifies me. Icarus is really the painter. You can see the implication. This constant business of somehow having to stand on one’s feet – the moment one has enough strength – and go on. And the power of the sun in relation to anything we can manage to do. An idea grows, and with the ‘Icarus’, I thought about the eventual destruction of everything; and this constant desire to build and create which every reasonable human being has.  I hope to paint it again, more richly and more dramatically. But I like this particular, quiet statement. It isn’t a question of the artist being too ambitious. An artist is doomed.  Nothing comes to what he wishes it to be. It’s only a shadow of what he hopes for.

The legend is a most marvellous one. People have had these notions for thousands of years. These ideas have survived because of their profundity. With the roses I give myself some hope. One must never give up hope.