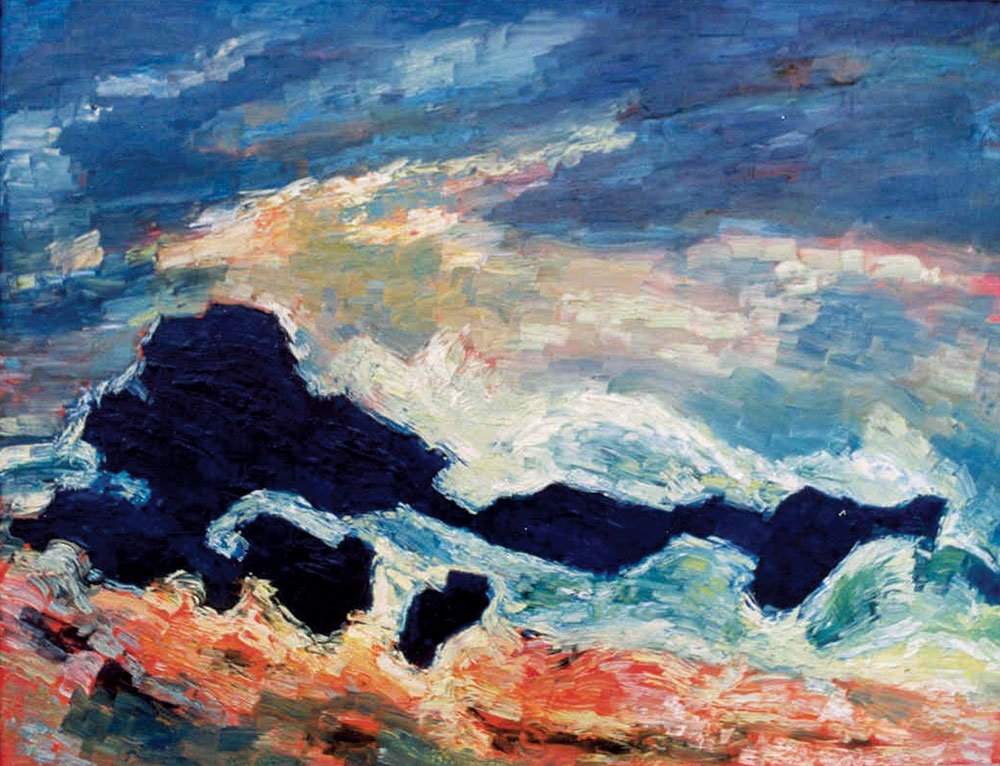 The Works
To see Houthuesen's development over 60 years

BBC Documentary on the Artist's Life

Introduction to Walk to the Moon

Walk To The Moon – The Story of Albert Houthuesen

Walk to the Moon is the first comprehensive, illustrated publication devoted to the life and work of Albert Houthuesen. The book is based on conversations with his biographer Richard Nathanson. Told in the artist’s own words and images, it describes a story unique in the history of art – both for its particular childhood tragedy; and the way this has imbued Houthuesen’s art with a unifying vision that stands alone.

Albert Houthuesen was born in Amsterdam but moved to London in 1912, following the sudden death of his father at the hand of his demented wife. During the twenties, Houthuesen worked at The Royal College of Art with Henry Moore, Barbara Hepworth, Edward Burra, Ceri Richards and Cecil Collins. And thereafter in isolation.

Walk to the Moon is the English translation of the Dutch expression Loop Naar de Maan meaning ‘Forget it’. It was how Houthuesen’s mother would respond whenever as a child, he asked her for painting materials.

Houthuesen was a Dutch-English modernist, whose life story forms one of the most sensational, offbeat, affecting artist’s biographies I have encountered. Told mostly in his own words, it is illustrated with his strange religious paintings, portraits – especially the sombre but high-colour clowns – and landscapes.

Copies are available from:

Richard Nathanson gives talks on Albert Houthuesen showing his development over sixty years. And how his work directly reflects his unique story and philosophy.  Included is a short extract from his 1976 BBC film on Houthuesen's life.

Through an engaging, superbly presented performance, Richard Nathanson became the artist Albert Houthuesen. Taking the audience on a journey that charted the artist’s life and work, by combining his words spoken to Richard over 40 years ago, with showing part of the very moving BBC documentary and beautifully sharp projected images of his pictures, the effect was spellbinding.

Richard has, through his passion, brought to life this fascinating, overlooked artist. A thoroughly enjoyable and informative event I can recommend to anyone.

This fascinating one-hour talk included the dramatic beginning of the 1976 BBC documentary-interview with the artist, followed by Nathanson reading from his biography the artist’s words which accompanied projected pictures showing his development over sixty years.

The lecture was very well-received by a capacity audience. And vividly conveyed Houthuesen’s mystical imagination. The consequences of his mother’s murder of his artist-father were poignantly described. Also Houthuesen’s isolation from the mainstream ‘art world’, his poverty and neglect. Nathanson’s calm, understated delivery very effectively brought home these things.

The talk ‘a walk through the mind’ of a visionary artist in love with nature, fulfilled all the criteria for bringing to life and inspiring interest in an artist who deserves much wider recognition.

Richard Nathanson’s presentation ‘Walk to the Moon - The Story of Albert Houthuesen’ was enormously enjoyable. And full of passion, conviction and marvellous clarity – rare in a lecturer these days.

What an intriguing, complicated figure Houthuesen is. I was particularly taken by the expressive power of his landscapes. They seem to me to be his most formally audacious and daring inventions, imbued with a remarkable colour sense.

I suspect that Houthuesen will come to be seen as one of the great figures in post-World  War II Western Art.  This will be facilitated by the new mood that is perceptible in the art world.  The current emphasis on pranks, from Damien Hirst to Jeff Koons to Murakami, may not last forever.